Beaches are beautiful and so is our

A beach lover’s dream, with 32 miles of sandy beaches. stretching from Orange Beach to Gulf Shores to Fort Morgan and Dauphin Island.
Your ultimate family beach vacation begins here, on the sugar-white sands of the Alabama Gulf Coast, a seemingly endless 32 mile stretch of sand so soft it squeaks under your feet, pristine turquoise waters and peaceful seclusion. All the ingredients for your best beach vacation perfectly spiced up with beach activities, world-class fishing and a hub of attractions right here on Pleasure Island. So, grab your beach umbrella, bucket and shovel and let’s explore the unique beaches of Gulf Shores, Orange Beach, Fort Morgan and Dauphin Island, Alabama.

Alabama sees over 20 million tourists every year, of which most visitors come to the state for its amazing beaches such as Gulf Shores and Orange Beach. Alabama’s coastline, located by the Gulf of Mexico, is not as prominent as Florida, but it is every bit as worthy of attention..

Vacationing on the pristine beaches of Alabama is like none other in the world. Gulf Shores and Orange Beach are still unspoiled and charming with a better selection of hotel / condo rentals and more family fun than ever.

While destinations such as Gulf Shores and Orange Beach dominate the Alabama beach scene, the state has many more to offer such as Fort Morgan, Dauphin Island and Fairhope.

Explore coastal wetlands and historic sites. Dine at acclaimed world class gourmet restaurants. Fix you own seafood caught today straight from the Gulf of Mexico at our many seafood markets. Charter a sunset cruise or an all-day fishing excursion. 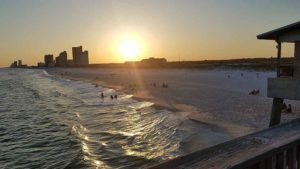 And you’ll never forget our sunsets.